Where my work is going and what new releases you shall see, with additional rambling about mental health and the world burning.

I recently threatened to post a blog here and, worryingly, it looks like that threat came true, if slightly later than planned.

Here we are, flaming June having left in a seemingly continuous rolling ominosity of thunder, the world burning around us and all seemingly hastening to ashes. I am currently in France, not too far, as my corvid cousins fly, from where a new all-time highest temperature of 45.9°c was recorded. As you may have read, this record was more than 1.5°c higher than the previous record, set in the hot summer of 2003 — not just a record for June, but for the whole year, for as long as records have been kept. As extraordinary as this should be, I fear it is actually the new normal. William Gibson’s Jackpot continues.

Yet my post is not about this. Or is it? (If you are here to simply find out what’s happening with my stories and find this background unnecessary/uninteresting, downright irritating, click ahead to here.) The images in this post are all of my current locale, the western edge of the Alps.

Many years ago I was diagnosed with stress, anxiety and chronic depression. Chronic, for those of you who aren’t sure, means it does not go away with time — it is always there, lurking and, at times, leaping out from said lurk, savaging and taking over once more. The doctor I saw was overworked, I had very little time with them and very little personal will to be there. Indeed, to be honest, I was only there because I had to be — in order to acquire a reason for not going in to work. I wanted to get home to self-medicate and mask my problems as fast as I humanly could, which I duly did, and continued to do for some time.

Now, let’s fast-forward for some years (cough quite a few years). I am without a fixed abode, nomadic, making money from my words and filling my days with Things That Matter. This does not mean I do not still have depression, no, what it means is I have learnt self-care, I have learnt how to mitigate symptoms, how to recognise my warning signs and take action accordingly.

This year is not the first I have made money from my fiction, but it is the year that certain strands are finally coming together, twisted into a skein to be thrown to the winds of the world — stories released and, hopefully, stories read and enjoyed.

Yet what does this have to do with the world in flames? And how are my stories connected to my own health?

We all need a reason to be, something that keeps us going. Some people find this in friendships, others in a hobby about which they are deeply passionate, and then there are those who find it in making the lives of others miserable, in sad attempts to share and impose their own malaise. Whatever it is, a raison d’etre is crucial.

For a very long time, I was never sure what mine was. Could it be my family and friends, or time used wisely out in wild places, amongst nature? Both of these are important to me, essential and interwoven in all parts of my life, but it was something else that ultimately drove me forward — the power of words.

As long as I can remember, I always ‘wanted to be a writer’. It was only comparatively recently that I realised that to ‘be’ a writer one simply has to write. For many years I was told (as I know so many others were too) that making money from words was neither sensible nor possible. It took me a long time to realise that what was truly not sensible was being stuck in an office with barely any natural daylight, doing a job I did not really want to do, for money I did not really want to spend on the ‘usual’ things, with additional migraines. So I changed things. I looked at the life I wanted, I planned, was lucky enough to enlist the support of my family and my friends (although some simply could not understand what I was doing, leaving behind the known for an uncertain future). Slowly, step by step, I built that life — the life I now have (with some extra, bonus, unforeseen joys too).

Early on in this plan, I realised I needed to have a business model, something that would sustain me and give me options, rather than placing all my proverbial eggs in that one basket. I knew the most sensible option was to be a hybrid author — to both publish traditionally and by myself and to supplement this with different income streams, such as copywriting, social media management, selling articles, photographs etc.

This (sorta) brave, new(ish) world of ours helped — I can write on my phone, en-route to my next destination, I can write on my laptop, even separating the screen to use as a tablet with a stylus if needed, I can handwrite and then take photos of this, digitising and backing-up more-or-less instantly. I can get a wi-fi signal in the Alps using a portable router, or use my phone for a hotspot in the jungles of SE Asia. I can find work and complete work on the internet, talk to friends and strangers and secure more.

And so I set out, step by step (admittedly, there were times when I took several backwards along the way) until I am here at this point now. I am at times easily distracted, as I know many writers are, one big, shiny, new idea can look far more alluring and glamorous than the trudge of a third or fourth edit, but I have learnt to (mostly) control this.

As I have travelled from place to place, I have slowly chipped away at the stories I am about to release: draft, redraft, edit, edit, polish and repeat. I have done my best to prevaricate, to postpone and put-off, to procrastinate and generally try and avoid placing myself in a situation where I could actually succeed (far more terrifying to me, as I’ve mentioned before).

I can only do this for a short time longer — Things are now ready to be released.

The four (and their attendant bonus tales) offer hints at a longer work to come, introducing characters, places, and themes that will reappear in this work, the whole entitled The Lesser Evil. I suppose these are prologues of a kind — not essential to the novel series (yes, this will be epic fantasy), but giving the reader extra value.

Then there are other things that are not ready to be released but will be worked upon in the coming weeks and months. I find it easier to work on one project through one stage (eg first draft, or edit one), rather than jumping between things. That said, I can switch between tasks (eg edit one bonus story whilst writing the first draft of a non-fiction book) relatively easily, at the same time. What I do not seem to be able to do (and this may not be a bad thing?) is write two first drafts at the same time, or edit several projects at once.

Once the four novellas and bonuses are out there in the world, these things will happen:

For now, this piece should suffice to tell you what direction my personal work is heading. The timescale is not exactly fixed — I will try to move things forward as quickly as possible — the plan had been to release the first two novellas in June and, before that, in May and, before that… This did not happen, deadlines came back to life. Life happened. However, I shall hazard a guess that by the time you read this, the first two novellas (and bonuses) will be released within a month of this date, along with the first French translation. A month at most.

Even more boom! than the other day. This tale is, as you can see on the photo, now approaching 6k words (this includes TKNOTES, however). I suspect there may be around 2-3k more to craft Read more… 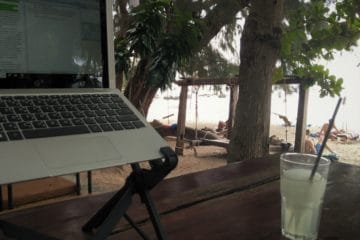 What Works For Me… (…May Not For You) I recently posted a version of this on my tumblr,  having typed it up with fat, but surprisingly speedy, thumbs on my phone one morning in bed. Read more…