The East Coast of Caithness

Today is St. Andrew’s Day, so it makes sense to post something about Scotland and, in particular, the county I currently inhabit: Caithness.

The North Coast 500 (NC500) long distance coastal route has brought an increased number of tourists to Caithness. It seems wise to suggest this number will only continue to rise, as word of mouth, blog posts, Youtube videos, and other media exposure spread the word about this previously little-visited corner of Scotland.

Caithness is sometimes referred to as “The Lowlands Beyond The Highlands”; the vast wilderness of The Flow Country covers many hundreds of square miles, with fertile farmland beyond. The edges of the county alternate between towering sea cliffs, with natural features such as stacks, caves, and arches, through to beaches that stretch for miles — golden, dune-backed sands you will often have absolutely to yourself.

Caithness is full of culture, and the NC500 has given others a chance to discover just how much it has on offer. There is a wealth of historic and prehistoric sites to visit, wonderful natural landscapes and features, nature in abundance, and great places to sample locally made, grown, raised and collected produce — including the world’s best single malt whisky. This is also a place at the forefront of the green energy revolution, with the world’s largest offshore tidal stream energy array, hidden beneath the turbulent and powerful waters of the Pentland Firth.

There is so much to see and do along the NC500 that you’d be forgiven for wondering where exactly to start. For this reason I have chosen a narrow brief — a handful of places situated along the east coast of Caithness. To make matters even easier for you, these are listed from south to north, as if you were travelling along the A9 and A99, from Inverness to John O’Groats. Some are better known than others, but all are worth a visit. Badbea. A rugged place, and not really a home.

First up, and one of the first road signs you encounter in Caithness, is Badbea. This is a windswept and wild place, mournful, haunting, and a reminder of a sad part of Scotland’s history. Villagers from glens further inland were removed from their ancestral homes, evicted to make way for sheep, and told to live on a strip of land so unsuitable that legend has it everything had to be tied down — from cattle to children — in order to stop them blowing off the cliffs. Today it is a place of ruins, left to return to nature again. The last resident left in 1911, and Badbea joined the ranks of places-in-time, abandoned as its inhabitants once were by the rich, and the powerful.

Next on our northward journey is Dunbeath, birthplace of Neil M. Gunn. I have shared photos of this strath (river valley) before, such as here on flickr, and I am likely to do so again. It lends itself to photography, whatever the season, whether you walk down to the harbour, and the statue of Kenn and the Salmon, or (my favourite) upstream along the river. There are many opportunities to spot wildlife here, along with exceptionally well preserved archaeological remains. The walled graveyard perched above the strath is well placed for some stunning photos.

As a bonus suggestion all the wee fishing villages along this coast are worth stopping at. Each has its own charm, centred around harbours once full of herring boats, and each lends itself to photographic opportunities. The names themselves are varied, and show the variety of historical influences on Caithness: Latheronwheel, Lybster, Whaligoe, Sarclet; -ster names indicate a Viking-era farmstead, and each refers to whose farm it was — Occumster was the farm of Occum, Ulbster the farm of Ulb, Thrumster Thrum, Bilbster Bilb. It can be quite interesting trying to work out where the original farm may have been (or perhaps that’s just the ex-archaeologist in me?). Natural arch just south east of Wick. I keep meaning to get someone to take a photo of me on top of it.

Whaligoe is one tiny port that deserves a special mention of its own. To reach the harbour below requires a descent down 365 steps, lovingly maintained and repaired by locals. It is humbling to think that the fish would be carried up all these steps, usually by the women who gutted them, then transported on foot, all the way to Wick to be sold. There is a well placed and excellent café at the top, offering stunning views down to the cliffs and sea below, and furnished with a rather tasty menu (with gluten free options — something rather useful for yours truly).

The whole of this coastline is full of natural wonder. Some of these places, such as Duncansby Stacks, are relatively well known and oft-photographed. Others, however, are often overlooked. Walk from the Castle of Auld Wick south towards Sarclet, for example, and you do not have far to go to see huge sea caves, wonderful rock formations, natural arches, vertigo-inducing cliffs, and all the attendant bird and wildlife that goes hand-in-hand with such places.

As part of some research I was undertaking, I remember reading an old newspaper article about Caithness which erroneously suggested there were only two castles in the whole county. There are in fact many more than this, some still inhabited; whether a private home (New Keiss Castle), perhaps a luxury hotel (Ackergill Tower) or a retreat for royalty (Castle of Mey). There are also many ruins (Castle of Auld Wick, the old Keiss Castle, Bucholie Castle and others). The one I would recommend visiting is the ruins of Castle Sinclair Girnigoe, located just north of Wick. 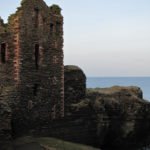 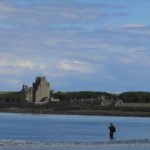 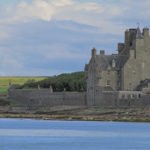 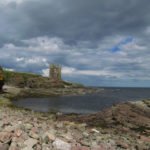 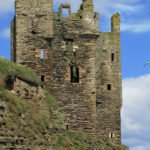 Girnigoe is situated on the cliffs to the south of Sinclair Bay, a sandy bite out of the coastline that stretches gleaming white to the north. Known locally as both Reiss and Keiss beach (Reiss being the southern part, and Keiss being the northern), it is a good spot to see wildlife, such as dolphins, seals, otters and even passing orca. This is also an excellent location to see bird-life, and to examine the ecosystem of the dunes that run behind the sands. Ackergill Tower is also on the southern part of the bay, with Keiss Castle to the north, and there are also remains of wartime fortifications, and even the boiler from a wrecked ship. 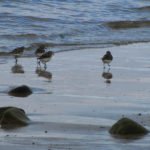 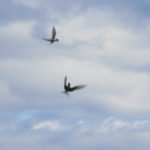 The clear waters of Auckengill Bay

A little further north is the Caithness Broch Centre at Auckengill. This corner of the world should be more famous for these Iron Age towers than it is, and the Caithness Broch Project is doing their best to ensure this happens. Their idea, simply put, is to build a full size replica of a broch — no small task. Auckengill itself has a recently re-excavated broch of its own, along with curious follies built by John Nicholson but, for me, the best bit is the small bay below. This has a mixture of sand and stone underfoot, crystal clear waters, shells, flowers and wildlife, and it is perfect for a paddle on a warm day.

Finally, on this brief trip up the eastern seaboard of Caithness, is the more well-known destination of Duncansby Head, and the huge sea stacks a little further south. Park just before the lighthouse and walk down the coast a little way. In the right season the cliffs are full of nesting birds, including the always photogenic puffins. The stacks themselves are quite stunning and a fitting place to leave this wee trip along the coast. 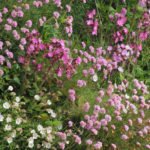 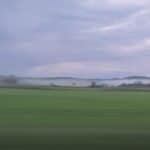 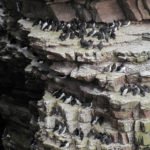 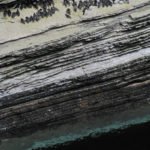 There are other places I could mention along this route (and probably will in the future), and that is before I even turn to the interior of Caithness, or the northern coast — the furthest north you can travel on the British mainland. In short, Caithness is well worth a visit.